Here it is, the culprit of significant damage in Arkansas landscapes during summer months. They are right on time this year; usually they emerge late June and early July. While it’s certainly not the only pest we are hearing about this week (yes, we are talking about you, slugs and bagworms), Japanese Beetles are really taking a bite out of some of our favorite plants… and inviting their friends to join the feast. What?! Yup, this pest gives off a pheromone when feeding, which can quickly turn a solitary meal into a veritable feeding frenzy, leaving your plants decimated.

Japanese Beetles are pretty little insects with blue-green heads and lovely copper colored backs that emerge from the soil and begin feeding as adults, typically in late June. They will lay eggs in July and August, leading to the emergence of more Japanese Beetles next year, and yet another round of voracious, indiscriminate consumption of over 300 different species of common landscape plants, such as our beloved roses. The one pictured above has been loving life on a contorted filbert.  For shame!

Now, it only sounds bad because it is. Be vigilant in checking your landscape regularly for this and other damaging pests. Often times the first sign is skeletonized leaves (leaves with only veins remaining, see below).  Treat as soon as you see evidence of this pest, before other Japanese Beetles join the party and completely denude your plants of leaves. 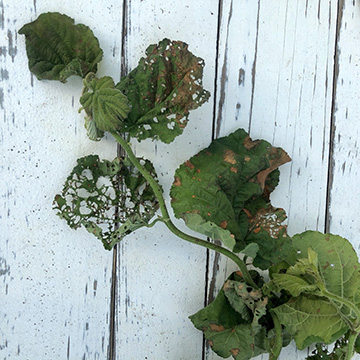 What are effective control measures?

We carry Japanese & Oriental Beetle Traps. They are great for use near plants that are in bloom and may be attracting beneficial insects as well. The traps contain an attractant that last 6-8 weeks, the entire beetle season. Place the traps in an area where you don’t mind a little light feeding, as traps typically don’t get every single beetle. Increase effectiveness in hard hit areas by putting out several traps and asking your neighbors to do the same.

Contact sprays such as Hi-Yield Systemic Insect Spray, 38 Plus and Spinosad are also good control methods. As with all pest control products, read instructions carefully and use as directed.

Soil drenches, such as Ferti-Lome Tree & Shrub Systemic Insect Drench, would work except they must be applied early in the season, before you see any damage. This makes them ineffective as a control once Japanese Beetles are present. However, once you have had an outbreak in your landscape, apply to your plants as new leaves emerge the following spring. Taking this step can interrupt the cycle of damage, by taking care of the next generation of Japanese Beetles after they emerge and start to feed next summer.

Huh?  Well, the immature stage of this beetle is a grub, which can live for 9 months in the soil. Kill the grub, no beetle emerges. Timing is key for grub control; some chemicals are more effective as preventatives where as others are effective on adult grubs.  If you have seen one grub, chances are you have many. In this case, treat with a curative grub control versus a preventative one. We carry Bayer Complete Insect Killer for Soil & Turf which offers both quick treatment (kills surface insects in 24 hours)  and 3 months of residual control of many pests. For Japanese Beetle grub control, apply in late July or early August, when the grubs are beginning to emerge to help eliminate next years’ population. 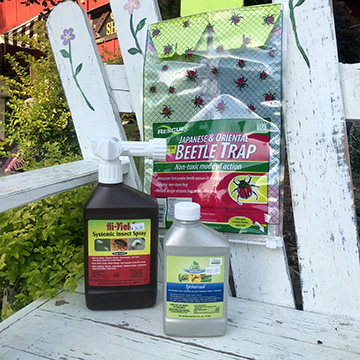 Adult Japanese Beetles are only around 40 days or so but they can do a lot of damage during that time so treat as soon as any signs are evident. Keep a watch out for new infestations. Just because you treated, doesn’t mean your neighbor did, and these populations can cover a significant amount of ground during feeding. For plants that have been effected, reduce plant stress by removing heavily damaged leaves (if feasible), watering appropriately, and avoid the application of quick release, high nitrogen fertilizers.