How to Control Bagworms in Your Landscape 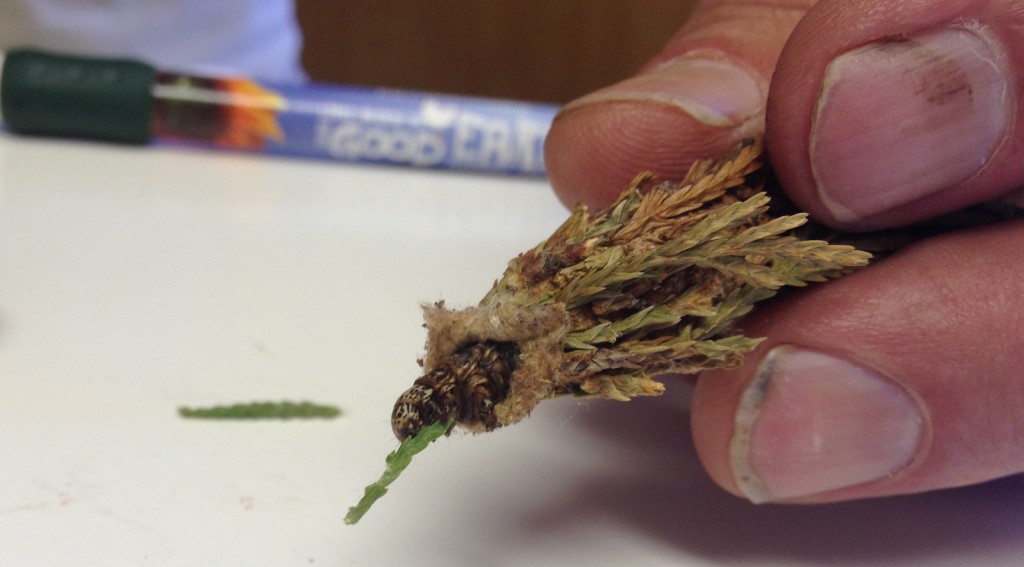 You see them on all kinds of evergreens…brown cocoons, containing the dreaded bagworm, destructive defoliator of your precious plants!   Unfortunately, often by the time these bags are noticed, the caterpillar has begun to pupate and is past the point of effective control.  Our goal with this blog post is stress how important timing is when learning how to control bagworms in your landscape. As of now, July in central Arkansas, it’s still a good time to treat!

Bagworm is a term loosely describing several caterpillars with a similar life cycle and common hosts, which includes both deciduous and evergreen trees and large shrubs.  The most heavily affected hosts include junipers, spruce, arborvitae, pine and cedars.  Early in the summer season, the bagworms are still young and consuming huge portions of foliage.  They are very active and can be seen on the ground around the above mentioned plants and the young bagworms are creating their small green bags, which can be difficult to see until they are attached to the plant and start to brown.  Later in the season, many bagworms are in the stage shown above (taken in late August); caterpillars (mature larvae) that are still feeding but will soon attach their bags to the host plants and begin to molt in the pupa state in which they are mostly inactive and unable to feed.  After the bagworms pupate (7-10 days), the adult moths mate, and then the female adults lay eggs (between 500 and 1,000) which will become next summers (late May to mid-June) voracious eaters on the same host plant.  You can see where several seasons without control can be devastating!

So, it’s like we said above, the trick to controlling these pest is good timing.  Once the caterpillars are not feeding, chemical control methods are not effective.  If the infestation isn’t too large, it might be possible to physically remove most of the bags at this point to remove the eggs that will hatch next year.  However, because these bags blend into the foliage, it can be difficult to get them all, so it’s a good idea to still chemically control the caterpillars in May and June (or July if they are still feeding).

Chemical control products include Ferti-Lome Natural Guard Caterpillar Killer Spray with Bt containing bacillus thuringiensis, which works by disrupting digestive system of the bagworms.  Ferti-Lome Natural Guard also makes a great product containing spinosad which works both on contact and is toxic when ingested by insects (product name is Spinosad or Spinosad Soap).  Hi-Yield 38 Plus, containing permethrin, is also effective. Bonide Systemic Insect Control containing acephate will also control bagworms.  We carry all of these control methods.  Bottomline, put treatment of evergreens on your gardening calendar.  Early summer is the best time to treat for this pest, typically.  If you miss this opportunity, the effectiveness of control decreases greatly. If you have bagworms this year, plan to spray again next year (mid-May) to catch any young caterpillars that hatch next season.

Posted on June 7, 2022 by Jennifer Gibson - Insect and Pest Control

Our Inventory See What's Growing
How to Effectively Use Dormant Oil
501.868.4666 View Hours