The Basics of Growing Bonsai 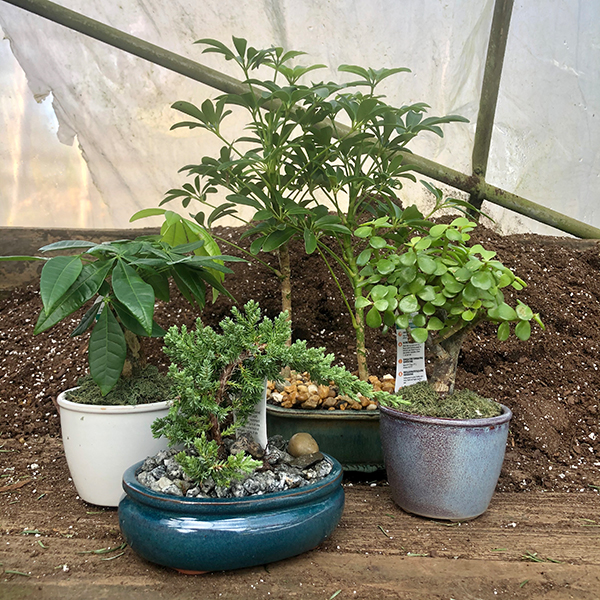 Although many think it’s a kind of plant, bonsai is actually the art form of growing a realistic but miniaturized representation of nature, specifically in a container. Translated, bonsai means planted in a container.

Although the word bon-sai is Japanese, the art it described originated in the Chinese empire. In fact, it can be traced back to around 200 BC Han China. The correct pronunciation is “bone-sigh” as opposed to “bahn-zi”.

Bonsai became popular in the United States in the 1950’s with American military stationed in Japan as well as immigrant populations on the West Coast.

Literati or Bunjin is a unique style with much more artistic license.  While most bonsai is focused on making a believable miniature tree, bonsai created in the Literati style are similar to dramatic trees found in Japanese landscape paintings with sparse foliage and dramatic twists and turns of the trunk.

Bonsai are not genetically dwarfed plants but plants that have been kept small and shaped through growing techniques such as constricting container size, pinching buds, pruning and wiring branches, and careful restriction of fertilizers.  Severe root pruning every few years also helps keep the leaves small and shorter stem growth.

Although any plant could be grown as a bonsai, ones with woody stems or trunk that grow true branches, have small leaves are easier and have interesting bark characteristics. Small containers are used to restrict roots and food storage capability, which in turns helps control plant size.

There are several basic styles of training; two of the most commonly seen are the windswept form and the upright form.  Variations on the upright form include formal upright, formal upright and slanting. There are also cascading and semi-cascading. The variety of plant chosen will matters here; some are more upright with a single trunk and others have a naturally cascading form.

Traditional plants used in this art form include azaleas, junipers, and Japanese maples. Modern bonsai can range from tropical houseplants such as ficus and schefflera to common gardens plants like crape myrtle and even peppers.

Small containers necessitate regular, thorough watering; avoid letting get too dry or stay too wet. The small containers also make the plants more
susceptible to cold or heat damage; choose an indoor spot with bright light and relatively high humidity. Care also depends on plant variety; tropical plants can be grown as bonsai and kept indoor year round. Temperate or typically hardy shrubs can be grown outdoors for most of the year and brought indoors during extreme temperatures and for special occasions.

We are also fortunate to have a local bonsai society; the Central Arkansas Bonsai Society.  Here is a link to their Facebook page.